An innovative school is such if it can meet the changing needs of society and improve the service offered in synergy with the demands of the territory, through a continuous evolution that ensures the quality of the educational system. The didactic commitment finds concreteness and motivation in the search for new strategies that are closer to the needs of children and, more generally, of all users.
In the specific case, the insertion of the school complex within the area represents the ideal opportunity for the general reorganization of a central urban place, which becomes the fulcrum of city life.
The new organization of the area starts from the identification of different centralities, some existing (municipality and Piazza San Francesco), and one created ex Novo in an opposite position to them, defined by the area for residential development and market area, all connected by straight axes with bicycle and pedestrian lanes. These converge in a central node conceived as an area free from pre-established functions and set up for public events and outdoor activities for the entire community. This approach has allowed the connection of the whole lot through three main paths and several other capillary paths inside the green areas, which have been rethought to maintain the current conformation, avoiding modifying the hill and the important trees.
From the directives transposed by the DPP and the desire to connect the entire urban context in the manner described above, is defined the area of the new school in the largest space of the lot previously used as a soccer field. Once defined the connections, position, and hierarchy of the functions, we proceeded to the characterization and integration of the various design elements.

The design of the park is based on the need to give unity to the urban space. The intent is to create a natural and organic environment that expands and narrows, highlighting the paths and creating at the same time areas for meeting and sharing, allowing easy connection of existing pedestrian and bicycle paths with those designed within the park, along the north-south and east-west axes, and increasing the degree of permeability of the new city area.
The green areas are divided into public and of the school, which is reserved for a substantial portion of the area, given the important catchment area expected and the possibility of use for outdoor lessons, workshops, recreational and play activities.

Along the main axis, which leads to the market area, the main urban axis expands in correspondence with the access to the school. The latter looks like a single organism, on two levels, with large windows, screened by bands of vertical wooden slats. Once passed the gate that divides it from the public space, an internal square opens on which overlook the agora, the teaching rooms, and the canteen. The entrance to the school is from here, directly in the agora, characterized by a large space with double height with a staircase for both educational and recreational activities.
The conformation and arrangement of interior spaces aim to shape a school context based on innovation, experimentation, and cooperation among students. The didactic, recreational, and laboratory spaces are designed to be welcoming, functional, and flexible both from a spatial point of view and in terms of furniture and can be continuously configured according to the various educational needs.

A further element of integration between the city park and the school is the presence of green inside the patio and in the practicable roofs on the first floor. These elements contribute to the thermo-hygrometric comfort of the interior and in combination with specific technological solutions (ventilated walls, solar thermal and photovoltaic, solar shading, energy-saving systems, etc..), aim to achieve the NZEB standards. The west area of the building on the ground floor is entirely dedicated to both teaching and auxiliary staff.

The services of the school, usable by the community (multipurpose room, library, and gymnasium), are located in the north area of the school complex, with independent access and divided in such a way that they can be used simultaneously even during school hours. The desire for integration between school and society is fundamental in the project and is also expressed in the inclusion of five classrooms that can be used alternately by the school or the community. 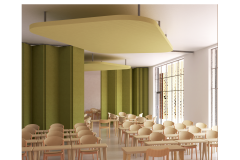 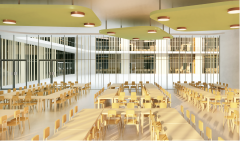 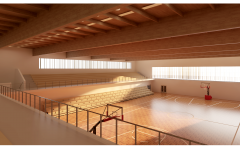 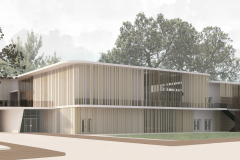 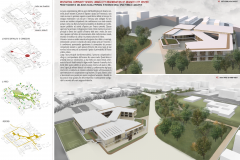 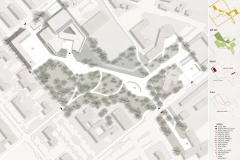 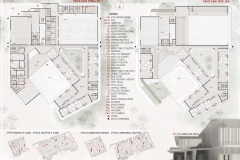 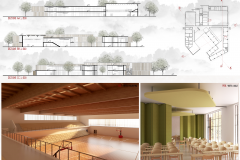