School and city hall in Satigny

The aim of the project has been to insert new volumes looking for an architectonic, distributive and relationship connection with the pre-existing buildings, building a new urban structure able to facilitate social relations through the creation of internal and external spaces which give an occasion to the citizens of Satigny to meet during every period of the year, also in bad climate’s conditions.

In the holistic vision the project born from the analysis of the place under some aspects:

Environment, buildings, landscapes, climate. The beauty of the naturalistic features has suggested an organic way of planning made by volumes of modest dimensions, which are placed on the ground following its natural curves.

The protected and covered paths embrace also the pre-existing buildings and modify their aspect integrating them with the new architecture.

The new school is composed of two blocks, the first one aimed to the two chambers to realize during the first intervention, which includes also the lower technical rooms, the second one aimed to the other six chambers with ancillary services (canteen, library, and rooms for extra-scholastic activities). This second block composed of two floors, over the garage placed in the basement, leads through little inner climbs the curve of the external terrain. The new school is connected to the old building through a covered yard, which works also as a filter for the entrance.

Thanks to the energy savings strategies prevented have been possible to hold the actual, annual energy need of the new structure within the values prevented by the Minergie standard. 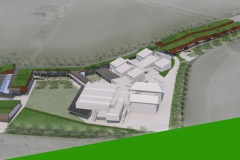 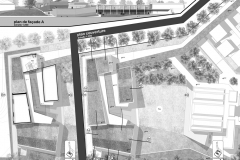 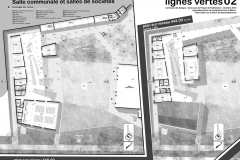 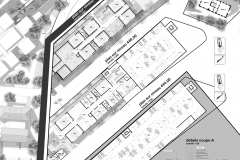 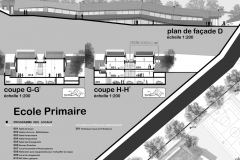